The Dot Magazine welcomes Justin and Mara Hurst aka DJs Starchild and Maraphoria. Aka Staraphoria. This DJ power couple recently became parents. And music is the force that brought Staraphoria together. In fact, their love for music is something they will always share with each other. “We promised each other in our wedding vows we’ll always play music together,” the duo says, “so it’s pretty serious…” This week, we ask the couple to create a new mix in our series that tracks their life together. Read on to enjoy songs from their sets, their trips together, their wedding, and now, songs they dance to with their baby, PJ.

Justin and Mara met at a Saigon bar called Broma at Justin’s music night, Lip Service, in 2013. “He had a lot of hair then, I could barely see his face,” Mara laughs, “but I told him his set was dope.” Justin was playing 90s RnB and slow jams back when there weren’t many DJs playing that kind of thing around town. Mara immediately noticed him. According to Justin she “was either dancing or staring me down the entire night”. And so Starphoria was born.

Music is still the force that connects Mara and Justin. Mara’s first meaningful experience with music was dancing to her dad’s Michael Jackson tapes around the age of three. Because her dad was based abroad, Mara and her mom would always listen to his tapes. “The tapes brought him closer to us,” Mara smiles warmly. And one of Justin’s earliest memories was vibing to “U Can’t Touch This” also when he was about three years old. “That was my jam,” Justin punches the air triumphantly.

Mara says she used to do everything while listening to music. Driving her scooter, studying, taking a shower, working, even falling asleep, Mara always had music on. “But I no longer need sleep music since I’ve been with Justin,” Mara says holding Justin’s hand tenderly.

But now they have a baby, PJ. Mara says that despite the change in lifestyle, they do their best to fit music into their new routine. So nowadays, Mara will listen when she’s cooking, in the morning with the baby, at the gym and, of course, when DJing. Hubby Justin thinks it’s important to have music on regularly for “the lil dude”. And strictly good music. “None of this “Baby Shark” nonsense. We play him what we like,” Justin exclaims, “We want him raised on that good funky stuff.”

Justin tells us that as he has gotten older, music has become a more and more powerful thing. Now, no matter what’s going on in his life, he knows he can feel better by putting one of his favourite feel-good grooves. Still, he feels he doesn’t listen to music as often as he should. When he does, it’s usually to find new tracks he can use in his sets. With that confession, he shares a little tip, “I try not to listen to my favourite jams too often outside of my sets so I don’t get tired of them…”

How would your spouse introduce you?

Justin: This is my wifey, Mara. But before we were married I would introduce her jokingly as my “fangirl”.

Mara: This is my man. He’s a goofy-ass dude, but I love him.

What’s the most underrated genre of music? And the most overrated?

Mara: Everyone has their own taste and preference. Music speaks to different people in different ways.

Justin: Right. But because of the internet, most genres have their platforms and communities. It’s hard to say what’s underrated and overrated these days, at least to us.

What do you listen to secretly when no one’s around?

Mara: Boyz II Men. I love singing along to the cheesy classics.

Justin: Madonna. Especially the tunes produced by Nile Rodgers. “Into the Groove” slaps so hard!

Mara: “Do I Do” by Stevie Wonder. The vocals and layers of instruments, especially the percussion, builds up to burst a bubble of feel-good vibes inside you. It’s hard to listen to this song and not move your shoulders at least a little. Also, I fell in love with this song all over again when Ja Rule sampled it in “Livin’ It Up”, a teenage classic for me.

Justin: “Cherry Pie” by Sade. My favorite track off Diamond Life which is an absolute masterpiece of an album. If you can’t fall in love with Sade’s voice and that bassline, then man…I don’t know.

Which of your set’s songs would you play someone so they understand you?

Mara: “Spectrum” by Goldlink. It samples a Missy Elliot track that I used to play in my first DJ sets, mixed into the newer groove sound that I’ve grown to love the last few years. It also samples a woman talking in Tagalog. Not sure where it’s from, but what she’s saying sounds like me describing how I feel about Justin. So spot on. It’s pretty funny.

Justin: “Phreaky MF” by Mike Dunn. It’s an absolutely filthy track. With the filthiest bass line. And everyone who knows me, knows I simply can’t help myself.

Mara: There were two special ones from the wedding. “When Somebody Loves You Back” by Teddy Pendergrass which was sung by the Father of the Bride and “Ain’t Nobody” by Chaka Khan was a highlight on the dancefloor during our set.

For my funeral, “Tracks of my Tears” by Smokey Robinson

Justin: And I’m gonna steal mine from the dude in High Fidelity, because “Many Rivers to Cross” by Jimmy Cliff is the perfect funeral song.

What mood should this Staraphoria mix put the listener in?

Describe this Staraphoria mix for us.

Mara: This mix is a sweet spot between our music styles. As DJs we are both into brighter, uplifting sounds so this mix is full of feel-good music for the soul…for anyone, anywhere. These are songs that will always be played in the Hurst home. It’s music from the heart.

Justin: One of the first tracks that I played that caught Mara’s ear was Maxwell’s “Ascension”. So, we begin this soul-nourishing experience with this track. A slow and true RnB track. Years later, it’s become a song that represents our feelings for one another.

Mara: Next up is Delegation’s “Oh Honey”, the first dance song at our wedding. The lyrics basically tell the story of our relationship. Plus, there’s a nice smooth beat, making it great for dancing in sync.

Justin: Then we kick up the rhythm just a pinch. “Stone Love” is a silky smooth boogie jam by Kashif, one of the greatest funk producers of the 80s. Kashif has been on heavy rotation since PJ was born. This track is one of his favorites.

Mara: Following that is “Bag Lady” by Erykah Badu, a very special one for us as Staraphoria. Right after getting engaged, we went to Manila to see Badu live. It’s still was one of the best shows we’ve ever seen. We were right up front and center for this lowkey, earthy song, and she went up to both of us, touching my hand and putting the mic in Justin’s face. He froze at the chorus.

Justin: After this, we get a little more high-key with Stevie Wonder’s “Do I Do”, one of the dopest feel-good jams of all time. This is one of Mara’s favorites from my sets. Put this on at any time at a party. Guaranteed to get a dancefloor groovin’.

Mara: In the Summer of 2016, we went to America together. There we saw Kendrick live in New York. In this mix, Kendrick Lamar’s “Untitled 08” represents this trip. It also always reminds us of cruising around California with this chill track on the car stereo.

Justin: We then switch gears to reggae. One of my all-time favorite reggae songs, in fact, “Your House” by Steele Pulse.

The next tune piles on a little more of that cheese, “Don’t Look Any Further” by Dennis Edwards, featuring Siedah Garrett. Because we’ve got each other. We’ve got our baby. We’ve got everything we need. Don’t look any further. Both of us have had this on rotation in our respective DJ sets.

Mara: We both love soulful divas with crazy good voices too. Chaka Khan is one of the best. “I Know You, I Live You” is one of her best. It’s bright and energetic.

Justin: And we wrap this soulful mix with Tony Toni Tone’s “Anniversary”. Ever since we first listened to this song together, we’ve been playing it every anniversary, before we were even married. We didn’t expect to already have a baby before our first one…but we’re lucky to get to listen to it with him. Every year. Feeding his soul. Until he’s 18…

Dustin Nguyen Tells Us His Bar Stories In This Saigon Guide

Dustin Phuc Nguyen's everywhere, with his Dustin on the Go production company, MC-ing at events, and popping up in bars and restaurants destined to become our favourites.

During her journey from growing up in Ninh Thuan in the shadow of a tobacco company factory, to marketing lead for an artist-management company, to manager of Suboi Entertainment, Kiwi Tho Phan has learned a lot.

Tuimi, now based in Saigon from Germany, released the trap-pop banger "Purpose" back in May. As her career takes off in Vietnam, we headed over to Estella Place to get her guest mix.

Allister Esguerra is flamboyant, fabulous and oh-so-charming. He's also an expert on Central Vietnam. So we met at Blush Beach Hoi An to get his guide to the region. 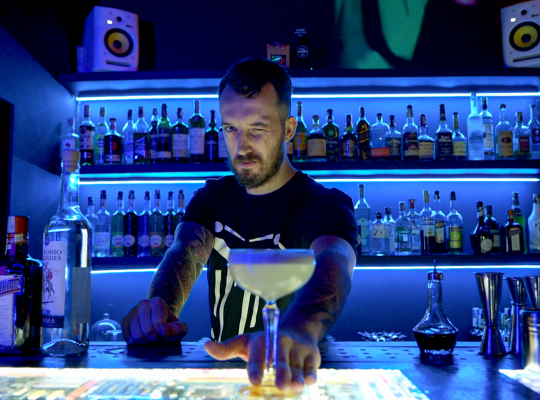