Flamboyant, fabulous and oh-so-charming, we spent some time hanging out with lifestyle brand consultant Allister Esguerra at Blush Beach Hoi An. There, he gave us his guide to Danang.

It’s a lazy Saturday afternoon in late September when Allister agrees to catch up with The Dot Magazine. His choice of venue for today – Blush Beach Hoi An – a resort-like beach club that wouldn’t look out of place in Las Vegas or Miami complete with an infinity pool and a virtually empty private beach – speaks volumes about his larger-than-life personality.

When we arrive he is already mid-flow, joking with the club’s general manager, and generally creating mischief. Trying to pin him down to start the interview is hard work: he needs to take a break to catch up with almost everyone that walks by.

Allister is someone who clearly loves people, something which began at university back home in the Philippines.

“In university, I started exploring a lot. Exploring my sexuality, what kind of music I liked, what kind of clothes I liked, what kinds of books I’d like to read or not read, even men and women I’d like to date.” But he also explored different kinds of people. “I explored different kinds of relationships, different cliques. I had study cliques and party cliques. Just all kinds of people. I’d hang out with people who were underprivileged and I’ve also hung out with folks from the high society. It’s been quite interesting, it has opened my eyes a lot!’

You grew up in the Philippines. What drew you to Vietnam?

The curiosity started when my mum started working in Vietnam in 2006. I couldn’t wrap my head around the fact that she was working in a place like Vietnam – a place that I assumed hadn’t really started to develop yet – and in my mind how could my mum provide the amount of resources that would enable me to go to an internationally-recognized university back in Manila? How could Vietnam provide that?

At that time my mum was working in Hoi An, at one of the big resorts by the beach. The area I lived in Manila was expensive – my living expenses were triple what they were elsewhere in the Philippines, Looking back I feel like my mum spent so much on me.

Every week my mum would call me and tell me stories about Central Vietnam. She would describe it as a very rural place and I said to my mum after university that I’m going to work for a year and then travel to Vietnam to check it out. My first flight was in December of 2010 from Manila to Saigon. And from that moment, I never looked back.

You’ve worked in Hanoi, Saigon, Nha Trang, Hoi An, and Danang, consulting for different restaurants, resorts, and high-end brands on their image. How is each city different?

Hanoi is very traditional and very tough. I think Hanoi is the toughest city to live in in the country, not just for foreigners, but also for local Vietnamese. I describe it as a city of extremes from weather to language. Everything is extreme, there is nothing in between.

Danang feels laid back maybe because it’s by the beach. Do you agree?

I would have described Danang as laid back maybe a few years ago but not anymore. There is actual traffic now. My first time driving in Danang in 2013 was like a scene from a movie. There were no cars, just bicycles – a few taxis here and there, and motorbikes. Probably 10% of the chaos that we currently experience. It was a bit like a ghost town. Now it’s non-stop. But it’s also become a very happening place. And I’m pretty sure it’s going to get a lot bigger.

Describe Danang in a few words

Danang is the Pan-Asian version of paradise.

First, the destination itself is perfect for both Western and Asian tourists. Second, it serves as the gateway to Vietnam’s major UNESCO World Heritage Sites: Hoi An Old Town, the My Son Sanctuary, Hue Imperial Capital, and the biggest cave in the world, Son Doong Cave in Phong Nha-Ke Bang National Park located in Quang Binh Province. The area is both modern and historic.

Where should we go to feel good in Danang?

It depends on what kind of unwinding you want to do. There’s My Khe Beach for public use. It has some stunning views of the Son Tra Peninsula and Chua Linh Ung. For a little bit of adventure, you could head to the Hai Van Pass and visit Lang Co Beach on the other side.

Then you have the Son Tra Peninsula for monkey hunting during sunset. There’s the Marble Mountain for a short trek and some mini-caving adventures. But for me, still, the ultimate way to enjoy Danang is not to plan anything too strictly and get acquainted with the locals.

Where is the best place for food in Danang?

The tastiest street food dish I’ve had so far in the city is com tam (broken rice), which is the number one southern dish. I crave for it. Next is bun cha ca, which is one of the city’s most popular local dishes.

For good traditional Vietnamese food, I’d recommend Pho Thu, a chain that serves Northern-style pho (pho bac). Or Luna for a casual pizza or a bowl of pasta in Danang.

Where should we go if we’re on a date?

There are thousands of trendy restaurants and there are not that many people to fill them all up so there are almost too many choices. To me, the best dinner date experience will always be in a hotel-resort restaurant. For first dates, I highly recommend Le Comptoir. Chef Olivier Corti’s French cooking is beyond impeccable. His handsome face, his charming smile, and his amazing team also add up to the ideal dinner date experience.

If it’s an anniversary or a very special occasion, I would go to La Maison 1888 at The InterContinental in Son Tra. It’s worth every penny, every time.

Where is the best place for brunch?

The InterContinental has the best brunch you could ever have in Central Vietnam. My favourite part of the brunch is the champagne, honey! You go just for the free flow.

And there’s the Sunday Chinese Buffet Lunch at the Grand Mercure Danang.

What about if it’s Friday night and we feel like partying?

Well my room, of course, that’s where the party is. Haha! Just kidding. I mean…half kidding.

There’s a bar I love called The Craftsman Cocktail Bar. I have been in Vietnam for almost a decade now and I believe this bar takes second spot in my list of the best bars in Vietnam (my first one is in Saigon). Very good service, very good cocktails, and very handsome bartenders as well.

Where is the best place for coffee?

Cong Caphe. It has been my favourite coffee shop since 2012. I only take two things: bac xiu da, like a version of Saigon’s ca phe sua da but sweeter and cot dua cacao, which is the Vietnamese version of a chocolate milkshake.

What tourist destination is worth our time?

Even if I say the Marble Mountain or the Golden Hands Bridge in Ba Na Hills are boring, for other people they are amazing. It depends on what you want to do.

My favourite tourist spot in Danang would be The Dragon Bridge (it spits fire at night). It even blows beer on special occasions!

Which place can be our little secret?

It’s in Hoi An. There’s a secret restaurant there in the countryside and I’m usually the only one there. But I’m not going to tell you where it is, I only take very special people there!

Where Do Four Of Saigon’s Most Exciting Chefs Get Their Foodie Kicks?

With the new Glow Inc. launching we headed over to top up our tan (that frankly is pretty faded after lockdown) and to get the skinny on Selene’s favourite things in life.

Hailing from Berlin, Minoto has lived two years in Vietnam. Since the switch he's played Lush’s front house, Drama Pub, Piu Piu, and Boiler Room at Baroness and more. So, we asked him to give us some musical goodies. 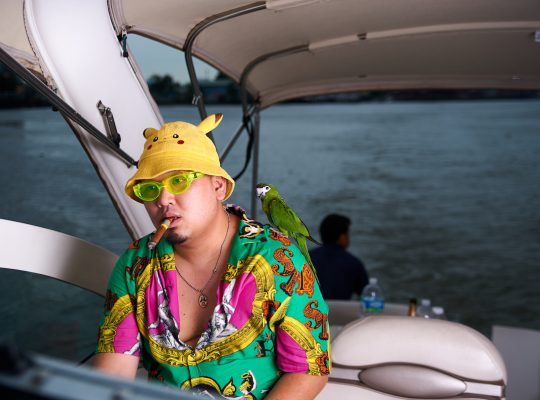