Singer-songwriter Tuimi grew up in Dresden singing karaoke and playing the piano until a love of artists like Alicia Keys, Missy Elliott, and Kanye West inspired her own career. Now based in Saigon, we asked Tuimi for her favorite ten tracks of all time.

Vietnamese-German Thùy My Phạm is better known these days as the singer-songwriter Tuimi. She was born and raised in Dresden in the former East Germany to Vietnamese parents. And Tuimi remembers first being on stage singing karaoke at age three. “Growing up in a Vietnamese family, karaoke has always been an essential part of family gatherings,” she laughs. Her music careers come a long way since then. Back in March, she released ‘Purpose’, a stunning bit of “alt-pop with a rolling trap beat” that features Hanoi rapper, Gizmo.

We wanted to dig deeper into Tuimi’s reminiscences on how she got into music. So, we caught up with her in Estella Place’s neon-lit Timezone video game arcade. This is Tuimi three months after moving to Saigon. And this is her guest mix for the latest in our series.

Tuimi, what did music mean to you growing up in Dresden?

The power of music is unbelievable. No matter how I’ve been feeling, music has always been by my side. And it’s always been the unfiltered way I’ve expressed myself. Being able to connect with people through music, whether at concerts, on the dancefloor, or just through a playlist is a wonderful thing. I think that’s because it’s based on emotions. Feelings can never be replaced by some AI!

For as long as I can remember, music has always been my therapy, my solace, my best friend, and my biggest love. Back when I was a teenager, when most of my classmates were out partying, I spent most of the time in my room making music…

When and where do you listen to music these days?

I really love listening to music in the morning. It energises me for the day. I especially like to listen while preparing breakfast or doing my make-up. Then in the evenings it helps me unwind.

Back in Germany, I had a car. One day a week I would drive on the Autobahn and listen to music really loud. I could scream along to anything and noone gave a fuck. That’s also where I loved to listen to all of my demos. It was the perfect way to check the quality of the mixes.

Do you still listen to the same things you did growing up?

Well, despite this era of short attention spans, I’m a big fan of albums. And I’ve become the kind of listener that doesn’t like to skip through songs – I listen to a song from the beginning right to the end. I think that’s because I know how much time and effort people put into creating a song or an album. Also, who knows if there is a killer bridge part or outro in store…

What are the most under- and over-rated genres of music?

That’s a tough one. I guess the most underrated genre to me might be classical music. It’s so soothing for the mind. The music that we listen to today is actually based on it. I’m baffled that younger listeners don’t have time for geniuses like Beethoven or Chopin.

And I wouldn’t say that there are any overrated music genres out there. Who am I to judge? Tastes differ. And I respect that.

“Crazy” by Gnarls Barkley. This song is, in my opinion, one of the greatest songs that has ever been written, performed and produced. On this track, CeeLo Green sounds just like a legend. His emotions perfectly capture the sentiments of the song. I think at some point each and everyone of us can relate to this song….

Which artists, songs, and albums inspired you to become a musician?

Some of the albums that triggered me to make my own include “Watch The Throne” By Kanye West & Jay-Z. “My Beautiful Dark Twisted Fantasy” by Kanye West. “Loose” by Nelly Furtado. “Good Kid, m.A.A.d City” by Kendrick Lamar.“Channel Orange” by Frank Ocean. “Love in the Future” by John Legend. And “Chapters” by Yuna.

But I guess it was Alicia Keys who inspired me a lot as a little kid with “Fallin”. That was the moment when mini me, at the age of 5, who had just started piano lessons, was like when I grow up I want to be like her.

Do you listen to other artists while you’re writing and recording or do you deliberately avoid it?

While I’m writing I tend to avoid listening to other stuff but when it comes to the production it does help at times to get inspired by vocal production techniques, vibes, or samples.

Can you describe this mix in a few sentences for us?

This mix consists of some of my favorite artists – many of whom I’ve mentioned during this interview. It’s uplifting. And some of the songs might give you food for thought. I wouldn’t say that there’s a specific single mood here. I’ve tried to pick out songs that I cherish solely based on the songwriting and emotion the artists have put into the vocal performance. But in general, it should be put you in a good mood. That’s all.

What mood should your mix put the listener in?

For me personally, this list has helped me get through some hard times. It reminds me of why I love music and the power of music too. I could never get annoyed about any of these songs just because they are so well constructed and transfer such pure emotions to me. I don’t know if it necessarily reflects my character but I’d say it kind of reflect all of my colours, from sentimental, uplifting, overthinking, crazy, motivational, to badass…

Where would be the perfect place to listen this mix?

I’d recommend listening to these tunes while chilling after-hours…anywhere. They are all pretty easy to listen to and all of them have a beautiful message and meaning to me.

OK, finally tell us about your ten tracks.

We start with Frank Ocean feat. Andre3000 and “Super Rich Kids”. If you ask me what’s a 21st-century classic, this would be my answer. Gnarls Barkley’s “Crazy” I’ve talked about already. It’s straight-up one of my favourite songs of all time. Miguel’s “Adorn” is just a whole vibe. Plus, it reminds me of one of the most special concerts I’ve ever been to – it was at Madison Square Garden, where Miguel was supporting Alicia Keys. But Miguel just owned it!

Next is another Kanye track, “I wonder”. I love his “I don’t give a fuck” attitude. This song shows that Kanye’s a great O.G. sample digger – and mood elevation is guaranteed. Then there’s J.Cole’s “Wet Dreamz”. He’s just a poet! And this tune takes me back to my free and easy life as a 20-year-old college student.

After that is another poet, Kendrick Lamaar. “Poetic Justice” samples Janet Jackson’s “Any Time, Any Place” and that’s genius. This song takes me back to the time I lived in Queens, New York and blasted “Good Kid, m.A.A.d City” for about three months straight on every single subway ride.

Lizzo is the living example of that quote “be yourself, everyone else is taken” – such an inspirational artist full of self-empowerment and sass. Then, on Yuna’s “Time” the lyrics are so deep. It’s a true art to put actual storytelling into a song and not making it cringy. And I love the message! Then we’re back with Frank Ocean again – “Pink + White”. The production is so organic. Perfect after a rough day.

And we finish with H.E.R.’s “Hard Place” . I just love the simplicity of the lyrics and the production of this song and H.E.R.’s voice is just velvet! No need for belting out the high notes. In my opinion, she is the next R&B Queen of our generation.

All The Winners Of Vietnam Cocktail Festival’s Bar Awards

“Never before would I have thought I’d be regularly waking up before dawn, climbing mountains, having these adventures…” Pham Huy Trung shares the stories behind his three favourite shots.

Dogs In Lockdown: How Our Favorite Pooches Survived The Darkest Days Of The Pandemic

Dogs had it tough during lockdown too. Here, four of our favorites give us their experience during the darkest days of the pandemic.

What’s In The Fridges Of Some Of Saigon’s Top Chefs?

We know. We know. We're being nosey, but we wondered what our favorite chefs are eating... 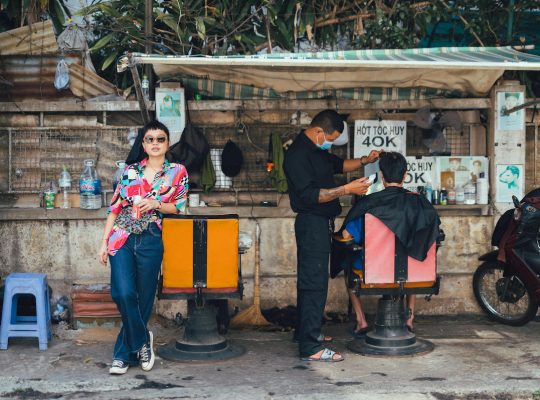