“I never thought I would make lingerie,” Thao Nhi Le shrugs her shoulders. Even as a little teeny bopper, Thao Nhi Le was in love with lingerie. You could find her wandering up and down the intimates section of her local H&M. Despite her fondness for these lacy little numbers, Thao Nhi Le never pictured herself as a designer of them. She did, however, always know she would ultimately have a role in the apparel industry.

When we meet up, Daphale Studios’ first brick-and-mortar store has just opened in Saigon. You can find it on 272C Pasteur. “Through this journey, I learned to be patient, resilient, and efficient,” Thao Nhi Le says.

It began a couple of years ago. Thao Nhi Le was checking out the Vietnamese fashion market when she saw something interesting. It was saturated with local brands but few lingerie brands with stylish designs at a good price point. This realisation birthed the idea to create a lingerie line, Daphale.

For a year Daphale Studios’ creations remained solely lingerie. Then, Thao Nhi Le extended the collection to include pieces that women could wear out. They were still in keeping with the brand as their shape and fabric resembles that of lingerie.

Thao Nhi Le was surrounded by fashion her whole life. “I grew up in a very fashionable family,” Thao Nhi Le begins, “My super stylish parents always dressed me up very cool when I was a kid.” Despite her parents’ sartorial inclinations, they didn’t allow young Thao Nhi Le to study fashion design, preferring instead that she choose a path in medicine, law or business. Thao Nhi Le found a way to circumvent a life as a doctor or lawyer. She found the major International Fashion Retail at Reutlingen University.

“This major was pretty hard to get into,” Thao Nhi Le tells us, “I decided to do an internship abroad in Vietnam after high school to gain more experience in the fashion industry.” This decision pushed Thao Nhi Le out of her comfort zone in Germany.

Thao Nhi Le moved to Vietnam for six months. She did two internships. The first was at Dep Magazine as a stylist intern. The second was at Zalora.vn, an online fashion retailer, as a campaign marketer and social media marketer. Naturally, she learned a lot about business in the fashion industry during this period.

These experiences also opened her eyes to the not-so-glamorous side of the fashion industry. Through her internship, Thao Nhi Le found that online fashion was much more fun than retail for her. And so six months in Vietnam was enough time for Thao Nhi Le to prepare herself for that daunting university application.

Each semester, a mere 20 students are admitted into this major. “I made it happen,” Thao Nhi Le beams with pride, “I’m not one to give up on something I really want.” Yes, a long four years at university taught Thao Nhi Le about marketing and the supply chain of the fashion industry, but Thao Nhi Le tells us that starting her own fashion business was a world apart. “I had such a long way to go, discovering by myself how to do things,” Thao Nhi Le clasps her hand together, “I’m grateful for friends who, having already started their own brands, supported me a lot during this journey.”

After university, Thao Nhi Le launched Daphale Studios. Daphale sourced designs from abroad with simple but luxe packaging. Thao Nhi Le was always at the helm. But at the very beginning, she had the help of her sister and mom, and friends who had launched their own fashion labels.

Daphale lived in Germany for six months before Thao Nhi Le took it to Vietnam to be closer to the production. Though Thao Nhi Le truly wanted to live in Vietnam, she struggled so much after move. “I had such a hard time finding the right suppliers for my brand,” Thao Nhi Le shakes her head, “and I wanted to produce my own designs and not source anymore.”

In a little over a year, everything is smooth sailing. And Thao Nhi Le has built up a one-man team into a team of 15 people.

“I have big dreams. My brand’s growing so fast. But I can’t stand still. I have to move forward with the growth,” Thao Nhi Le says. She’s looking forward to making the brand accessible internationally with faster and better shipping. She is also working toward better online shop performance and reaching more Asian countries. Depending on how fluidly operations at the new Daphale Studios store runs, Thao Nhi Le will decide whether she will open more stores in Vietnam in the near future.

Thao Nhi Le needs a smartphone for my daily work. Her iPhone keeps her in contact with Daphale Studios’ staff. She also uses it to take photos for her Instagram. Being a social media influencer was Thao Nhi Le first passion. For this young entrepreneur, it’s important to be available all the time. “It’s equally vital to stay updated with my team and maintain my presence on social media,” Thao Nhi Le gestures to her phone. “I wouldn’t be able to do either without my iPhone.”

This wallet is a birthday gift from one of my best friends in Saigon. “She gave it to me when I first moved to Vietnam,” Thao Nhi Le says. “It just reminds me of all my time living here.” It’s a small wallet which Thao Nhi Le says is enough for Vietnam. She typically only uses her cards and has very little cash on her.

There is one lipstick Thao Nhi Le wears nearly every day. It’s from MAC Cosmetics. The shade is a nude brown called Taupe. You’ll almost never see Nhi without this shade on her lips. Want proof? Check her Instagram.

Thao Nhi Le is partial to earthy tones on her face and lips, as they make her tanned skin “pop”. Nhi also prefers lip color with a matte sheen.  “I am a very casual girl and don’t like glittery stuff on my face,” Thao Nhi Le explains, “besides maybe some subtle highlighter.” According to this lingerie designer, lipstick is the cherry on top any makeup look. “Not only does it give the overall look a finishing touch, it imbues the wearer with a dash of extra confidence,” she smiles.

“Prada sunnies!” Nhi exclaims. These minimal and modern black sunnies are in a classy cateye shape. Thao Nhi Le tells us that this shape is particularly flattering for her squarish facial structure. She bought these glasses in Germany. “I think sunglasses can really express your style and personality,” Thao Nhi Le continues enthusiastically, “in the same way as clothing does!”

“I don’t even know where I got this from,” Thao Nhi Le laughs, turning over the worn black notebook in her hands, “I think this was a gift from someone.” Daphale Studios comes out with a new collection this winter. Thao Nhi Le tells us it’s always exciting for her to bring out new designs, but everything starts from some scribbles in this notebook.

The book also contains supplier information and production lists of designs and fabrics. Aside from being a young entrepreneur, Thao Nhi Le continues to push influencer jobs. The notebook is filled with jottings and times and dates, “as many events are always a part of my every week tasks”.

Thao Nhi Le keeps a small tester bottle of perfume in her bag. It’s Love Story by Chloe, a soft rosy scent. In general, Thao Nhi Le prefers things that are classy and not too gaudy. So it’s no surprise that she prefers a natural, subtle perfume over those that are sweet or too “candy-like”. Because the weather in Vietnam is so hot and humid, Thao Nhi Le always has a small perfume with her to use whenever she feels she needs a freshening up. “I just wanna smell good all the time,” Thao Nhi Le smiles, “It makes me feel prettier!”

Photos by Nam Tran Duy and Khooa Nguyen. Thanks to Em Wear for the use of their stylish sleepwear. And to Cong Sinh Cafe for the location.

Tuimi, now based in Saigon from Germany, released the trap-pop banger "Purpose" back in May. As her career takes off in Vietnam, we headed over to Estella Place to get her guest mix.

Coco Dressing Room is taking aim out our disposable culture. CEO and founder Thu Vu has created a huge shared wardrobe for customers. Here's how.

Our favorite DJ duo aka Justin and Mara Hurst share us their mix that tracks their life together. Enjoy songs from their sets, their trips together, their wedding, and now, songs they dance with their baby to. 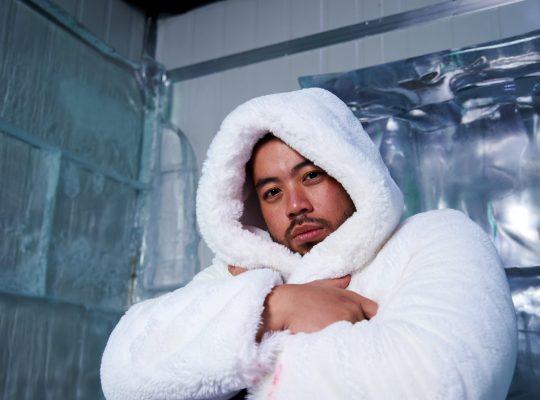