“Born and raised,” Thinh Doan smiles when we ask if he’s from Saigon. You would guess so judging from his knowledge of the city’s rooftops and side streets. He clearly loves this southern city too. “It’s dynamic, whether you’re a tourist or a local. There’s this sense of old meets new. And that makes it an amazing city for a photographer…”

Inspired by photographer Thinh Doan’s amazing urban panoramas, we’ve headed to one of his favourite undisclosed locations in District 7 to take in the view and to ask him a few questions for the latest in our photographers series.

The architecture and urban photography major is currently a freelance photographer and part-time English teacher. And his works are dark and brooding odes Saigon. Occasionally there’s a figure or two in the foreground to put the dramatic cityscape in perspective.

Somehow, his work portrays this city that’s been shot time and again like we’re seeing it for the first time. “Seven years now…” he explains about his time spent scaling apartment blocks and wading through backlots to capture the city in this unique way. At 26 years old, that means he began shooting at only 19. “It’s hard to say though,” he interrupts, “because it was my hobby before it became a professional pursuit. I’d spend most of my free time wandering around town, trying to find interesting angles to shoot Saigon from…and still do.”

He admits the results weren’t always this polished. “I mean, it’s not easy!” he laughs. But gradually, through practice and studying the art his skills got better and better. It wasn’t his initial choice of career. After graduating, he first wanted to continue to study accounting, but interest waned, while his interest in photography grew. So, he committed to becoming an architecture photographer.

“I feel urban photography is something new for Vietnamese people. Other countries in the region have a much more developed scene, places like Hong Kong and China, and Singapore. Here in Vietnam, people focus more on landscape and portrait photography. But urban photography is another good way to show the character of the country especially for the younger generation seeking a fresh viewpoint.”

His family and friends approve. “They really enjoy seeing my posts of my work, and I think they’ve discovered a lot about Saigon and beyond in the process.” And he also owes his start to his family. “They’ve been hugely supportive, especially my dad who bought me my first camera when I was in grade four, I think…”

Soon, we guess, the urban photography scene here will be saturated. Plus everyone with an iPhone can shoot nice photos now. “I think the difference between an amateur and a professional is a professional sees photography as part of their life. And they construct images with more consideration and thought than someone shooting spontaneously,” he says thoughtfully.

Although his images of Saigon standout, he’s also shot Singapore and Bangkok. “There’s not too much difference now, everywhere has skyscrapers…” But there are some specific locations he likes in each.

“Singapore has this green side that I love. Even the central area, which fascinates me, has a mix of skyscrapers, parks, and wide boulevards. And I love the Chinatown there. Like Saigon, it has an interesting mix of old and new. Then there’s The Hive at NTU (Nanyang Technological University), one of Singapore’s architectural marvels, Marina Bay Sands Hotel, Pinnacle Duxton and The Park Royal Hotel. But it’s not just the buildings, it’s the way they’re carefully planned and the way greenery and fresh air is allowed to flow around them. Thailand, on the other hand, is a maze of concrete, closer to Saigon but distinct in its own way.”

“Compared to Singapore, here in Saigon, I’m more interested in local life…maybe because I was born here. Shooting enables me to spark up conversations with strangers and so my understanding of my home city grows and grows,” he smiles. He clearly loves to shoot the apartment blocks of District 1 and Binh Thanh. “But besides that, Chinatown fascinates me, and the old apartments of District 5 like the Nguyen Thien Thuat, Ngo Gia Tu, and Vinh Hoi apartment blocks”.

Despite being local, accessing buildings isn’t easy. Research helps, digging around to find the buildings that can be accessed, and occasionally some money in the right places doesn’t hurt, “but I prefer that to going to the same buildings and getting the same shots as everyone else”.

We figure there must be some interesting stories behind the photos. “Right, one interesting story happened in 2018 in Singapore. I headed up to the roof of the Pinnacle Duxton. And there was a Singaporean. At first, I didn’t know who this person was. He came over, chatted, asked if I liked Singapore and the other usual small talk struck up between a tourist and a local. Only afterwards did I realise I’d been speaking to the Prime Minister, Lee Hsien Loong!”

In seven years of shooting, his style, and equipment, have changed a lot. His influences now include @joez19 “for his creativity” and @35mmfullsize “a true urban photographer”.

“And”, he adds, “I observe things differently, carefully looking around to find the best shot before committing to shoot”. He also switched from his original Canon 600D with a 10-18MM lens to Sony — including the Sony A7II and A7RII with a Sony 12-24MM “but still using some old Canon lenses…”

We wonder which image he’d choose to introduce his work to someone. And he chooses a shot of City Garden in Saigon’s Binh Thanh District.

“It’s pretty hard to show what I do with only one photo. If pushed, I’ll choose this image because it shows the contrast between urban and rural life in one frame. It’s the story of Vietnam too, an agricultural economy developing into something modern. It also represents my working style. Scouting the location over and over at different times of day; talking to locals to deeply understand the context of the location and only then shooting.”

“For me, this is the best location in Saigon. The rooftop allows views of the entire city. But what makes it truly special is how hard it is to access. And honestly, I used to be scared of heights. I countered that by thinking only of the photo I wanted to take…and not looking down. Gradually, things got easier and these days I barely think about it.”

“This particular shot was quite spontaneous for me. This friend was visiting from Mexico. She wanted to see Saigon from a different perspective. So I brought her here.”

“Also, this shot was taken three years ago. And you can see how much things have changed if you’re familiar with Saigon today….”

“Although I’ve talked a lot about how much I research and plan, this is another spontaneous shot. These people were waiting on their motorbikes at the traffic lights. I was actually shooting the sunset from the 32nd floor. Suddenly, I saw the light playing on the people waiting and so I turned my attention to them.”

“I love seeing the city from above, especially during the chaos of rush hour…thousands of people making their way home.”

“This image is of the old Binh Loi Railway Bridge. It was built in 1902 by the Société de construction de Levallois-Perret and it was a rare example of a swing bridge in Saigon. But, in fact, it was demolished a few weeks ago to be replaced by a new bridge.”

“This shot came at the end of my shoot. I stepped back to the main train line to make my way home. Suddenly the man appeared with his son behind him. And it was the perfect chance to take another shot that represents how important the bridge was to people.”

“The bridge represented an integral part of people’s lives there. You can see the son playing on the bridge while the man enjoys a moment rest, looking up at the structure. The adults would often sit beneath the bridge and chat at dusk while others would fish at the foot of the bridge. And now it’s gone…”

Linh Rateau founded Saigon District 2's Dancenter 13 years ago. And the contents of Linh's bag shows us what helps her stay balanced.

Nguyen Van refuses to call himself a photographer. And he won't let us call him one either. But his images, and his hot Instagram feed @odaucungchup, prove his love for the city he's called home for the last ten years.

Our favourite fashionista Thao Nhi Le has opened her first store in Saigon. We asked the Daphale Studios' founder what's in her bag. 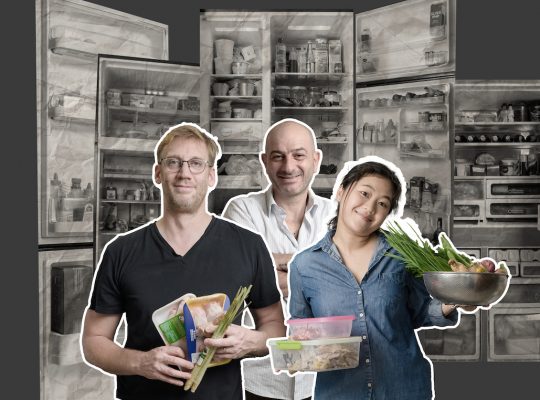 What's In The Fridges Of Some Of Saigon's Top Chefs?