Blush Beach Hoi An’s executive chef Brandon Winkeler fell in love with food in the tough kitchens of Chicago. Things got harder at a Michelin-star restaurant in San Francisco. These days, he’s enjoying the cool breeze at Blush Beach Hoi An while taking everything he’s learnt along the way and applying it to the perfect beach club menu. But we wondered where he goes to eat and drink when he’s not at Blush.

It doesn’t look much from outside. An exit off Lac Long Quan Street – the long straight road connecting Hoi An and Danang. But up the slope and past the warm greeting of the receptionist the chic horseshoe-shaped Blush Beach Club Hoi An frames a tranquil infinity pool and beyond a golden stretch of sand. Brandon doesn’t seem to notice. His full attention is on the staff setting up for the evening’s service.

Brandon knows the view pretty well by now. The executive chef has been here since the beginning (Blush opened back in July). He knows kitchens pretty well by now too having spent one-and-a-half years working at Restaurant Gary Danko – a San Francisco Fisherman Wharf institution. Brandon remembers the one-Michelin star restaurant being “full of San Francisco’s elite” but also as “hands down the most gruelling kitchen” that he ever worked in. With 175 nightly guests each ordering four- or five-course meals with a crew of only ten cooks it’s easy to understand why. “I almost quit after three weeks. But I’m so happy that I stuck it out. That restaurant taught me more about being a real hard-nosed cook than anywhere else in my career…” the imposing chef laughs at the memory.

Straight after culinary school, he had cut his teeth in restaurants in Chicago, “everything from fast food to fine dining”. These days the executive chef has two simple rules. “It has to taste good. And it has to look good,” he explains counting the rules off on his fingers. And the menu at Blush Beach Club Hoi An is his favourite of all the ones he’s created so far. “I’m at the point in my career where I think I just know what tastes good and hopefully what people will want,” he shrugs. So, we wondered which places in Danang had met the same simple, but essential, criteria for the latest in our Guest Concierge series.

Can you describe Danang and Hoi An in a few sentences?

Frenetic. Both Danang and Hoi An are developing at a pace that’s hard to keep up with. But, happily, as the community grows, it’s retaining its friendliness. The people here are some of the warmest I’ve ever met and the economic growth hasn’t changed that. And I hope it never does.

What’s the food scene like in Danang and Hoi An?

It’s evolving. When I first arrived in Central Vietnam good dining options were scarce. In the last three or four years we have seen an explosion in development and that has brought along with it a plethora of restaurants and bars worth checking out. Let me give you an example. Seven years ago, if you had asked a local friend to go have sushi with you they would look at you like you’re crazy. Now eating sushi is commonplace.

Which places do you take visitors from out of town to?

I have a list of local restaurants that I eat at regularly. That’s where I take my guests. I feel that many of the larger fancy-looking restaurants with equally over-sized menus are serving average food. The best local food here can often be found at small, hidden places that most foreigners wouldn’t usually stumble upon.

Only for The Dot Magazine, here’s some of my list. In Danang, there’s the best local my quang (at least in my opinion) at Quan Huong Que at 78 Phan Thanh. For seafood there’s Hai San Nam Danh (10 Tran Qaung Khai). It’s hard to find down a dark winding alley. But the effort is worthwhile. Inside you’ll find some of the freshest, tastiest seafood in Danang. Then there’s Ca Lua 04 Bin Minh 4. It’s a well-known nhau joint that’s a notch above the rest due to its atmosphere and very, very good food.

How should we spend our Friday night in Hoi An or Danang?

Start at the new Danang branch of the Japanese-owned Pizza 4Ps for dinner. After that, give the 1920s bar a visit for drinks and live music. After that, Sevva Sky Lounge for a delicious cocktail. And if you’re still going strong go to Golden Pine Pub where the party never stops…

Which are the most popular after-hours chefs’ hang-outs?

Most local chefs will hit up a nhau restaurant on their way home for a beer and a bite. Places like Lao Dai. Foreigners like me can usually be found with a beer in hand at Dirty Fingers, 406 Vo Nguyen Giap…or sitting in a fellow chef’s kitchen playing poker and getting drunk.

Where should we go in Danang or Hoi An for the best cocktails?

Elsewhere I have two recommendations. There’s The Craftsman at 48 Phan Tu. The young proprietor who opened this bar is rightly well-known in Danang for his cocktails. There I order their Penicillin – although you need to be a whisky lover like me to truly enjoy it.

The second bar is Te Bar on the 3rd floor at 41 Nguyen Thai Hoc. This bar is hidden above a branch of the ever-popular Cong Cafe chain. The entrance has a very speakeasy type of feeling to it and the bar has a great ambiance. At Te Bar you should give the Under the Bridger a try. It’s the only cocktail I’ve ever had with fish sauce in it. But don’t be scared! Trust me. It’s good.

Where’s the best place for a date in Danang or Hoi An?

I go to ThirtySeven Woodfired Grill + Bar (37 Phan Boi Chau, Hoi An). It’s a wonderful date-night spot. It’s slightly less than a year old but it’s a great addition to Hoi An’s food scene. You can take a romantic dinner table for two by the river or start off in the bar on the street side. There’s also a veranda upstairs for smoking cigars, and the woodfired grill has a certain primal attraction to it…

Which other high-end restaurants are worth a visit?

Undoubtedly Le Comptoir at 16 Che Lan Vien in Danang. It’s arguably the best western restaurant around. And it’s one of my personal favourites. I don’t go often but when I do it’s always a special treat.

And which place in Hoi An or Danang can be our little secret?

Sometimes you just need to hide out. The recently opened craft beer bar and pizza joint Hops and Crust (84 Cao Ba Quat, Danang) is my go-to to chill out spot. It’s quiet and cosy with great pizza as well. And, added to that, they serve craft beers from all over Vietnam.

Where can we drink the best coffee?

Cafes are plentiful in Vietnam but there are a couple of local stand-outs. Six on Six Cafe (14 Luu Quang Thuan, Da Nang) features artful specialty coffee alongside great western breakfasts and lunch items. It’s a great place to catch up on e-mails over a cold brew in this quiet alley.

Then there’s Reaching Out Tea House (131 Tran Phu, Hoi An). It has great tea and coffee options in a very quiet and peaceful setting. All the employees of this cafe, which also sells handmade souvenirs including beautifully-made coffee fins (Vietnamese coffee filters) that, along with a bag of coffee that they also sell, make the perfect gift, are hearing impaired.

Which tourist destination is worth our time? And which should we skip?

For an authentic local experience, head to the Central Market in Hoi An.

The Lady Buddha Statue and Son Tra Mountain are great in the late afternoon when the sun starts to fall. From there you get great views of Danang. And you can spend a fun couple of hours at Marble Mountain walking through the small caves with temples built into them.

For a serious adventure take the slow boat from Hoi An to Cham Island and spend a day swimming, diving and snorkelling. They also treat you with a dinner on the island followed by a bit of beach time.

And, for me, you can skip Bana Hills. It’s rather expensive to ride the tram there and in my opinion it doesn’t offer much when you arrive besides the nice views which can be enjoyed equally well in places like the Hai Van pass.

Finally, what’s in your refrigerator at home?

The basics! Eggs, cheese, milk, kimchi, fruit, beer and home-made dog food. At home my dogs Soi and Roxie eat more complicated food than I do…

Inside There VND Then The Saigon Concept Store And Cultural Hub

Giang Pham from LifeJuice Bar and the 420 Fitness Playground is a commited vegan and healthy life practitioner. Here, she shows us her favourite vegan spots in District 2.

Sean Halse, creator of one of the 100 best cocktails in the world and core member of Moonshine Academy & Consultancy gives us his side of Hanoi, the city he now calls home. 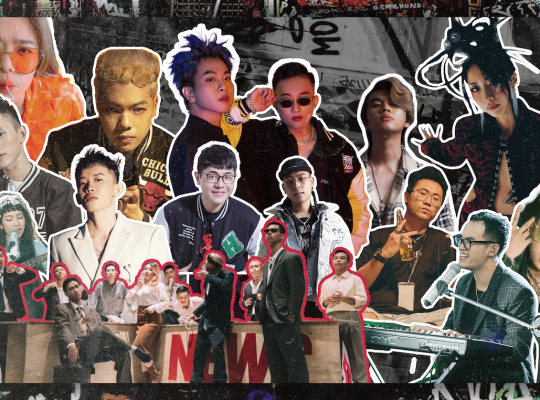